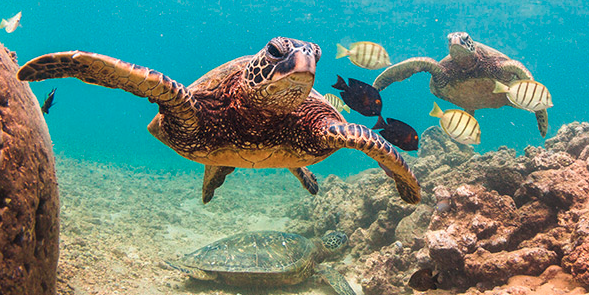 Sea turtles are a fascinating marine animal and one that we really need to take major steps to protect. In order to inspire people to take steps to supporting those organisations that work within turtle welfare, there really should be more of an understanding of what makes sea turtles such an amazing creature.

In order to help you to love sea turtles as much as we do, let’s take a look at some of the very best sea turtle facts.

There are seven species of sea turtle

Whilst you may think that a sea turtle is just a sea turtle, in actual fact there are seven different species that all fall under the same bracket. These are: green, loggerhead, olive ridley, hawksbill, leatherback, kemp’s ridley and flatback. Unfortunately, six of these seven species of sea turtle are now threatened or endangered and this is all down to the actions of humans.

Turtles face a number of threats

There has been a 90% population decline in the leatherback species over the last 30 years and tens of thousands of turtles are killed each year due to overharvesting and illegal trade. Other threats that are causing turtles to decline at a rapid rate include bycatch (when they are caught as a part of fishing practices for other species) habitat loss and also climate change.

Turtles live in almost every ocean in the world

Sea turtles live in a variety of oceans around the world. From the warmest seas to the coldest ones. In fact, turtles live as far north as Alaska and as far south as Chile. Not only do they live in particular areas, but sea turtles will also travel huge distances in order to feed, which means that they can cover an entire ocean simply to look for food.

They only come on land to lay eggs

A sea turtle will spend their entire lives at sea, however, a female will come ashore every 2 to 5 years in order to lay eggs. They will do this several times in the season and lay a number of eggs. After sixty days these eggs will hatch into baby sea turtles, or hatchlings as they are known and they will make their way down to the ocean from their nest, one of the most dangerous parts of their young lives.

Each species of sea turtle has a different diet

It is all too easy to assume that every sea turtle eats the same thing, but each species of sea turtle has a different diet. Green turtles will eat sea grasses, leatherbacks will feast on jellyfish and other soft-bodied animals. A loggerhead in comparison will eat animals with heavy shells such as clams and crabs, as do kemp’s ridley, whilst hawksbill turtles will eat sponges and invertebrates.

As you can see, there is so much to love about sea turtles and that is why there is so much being done around the world to protect them. If you want to help these amazing marine creatures, then why not check out some of these organisations and see what you can do to help them?

Want to join the discussion?
Feel free to contribute!